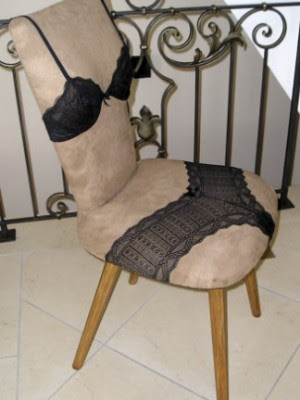 I have a friend with a real eye for design—in another life she definitely would have been a fabulous interior decorator if not an engineer creating useful products for better functionality. Often she’ll stare hard at something, point a menacing finger toward the thing and say, “That was designed by a man.” She never means this as a compliment. Rather, she she thinks men tend to design for looks, not function. Including functional flow in houses, on boats, in products we use in our everyday lives. They may think they’re helping, but generally, it seems not (or so my friend contends; do direct your complaints her way, thank you!).

(I Googled “man made” images and this is what came up first!)

I remember years back when public bathrooms started being retrofitted for wheelchair accessibility. It was at about the same time that the salesman for the Giant Toilet Paper Roll Company clearly hit the sales jackpot, because it seemed you couldn’t stumble upon a public loo in the U.S. without a gargantuan roll of the stuff. Which from a male-designed standpoint made some sense: buy big, buy cheap, sure. Buy big, replace less often. Okay, I’m with you. But then the plans things went awry: someone (a male? One wonders…) established standards that seem to have been implemented nation-wide about where to position these mambo-rolls within the narrow confines of a bathroom stall. It had some vague connection to wheelchair accessibility, but I can promise you it had nothing to do with how those in a wheelchair would then be able to access the stuff. 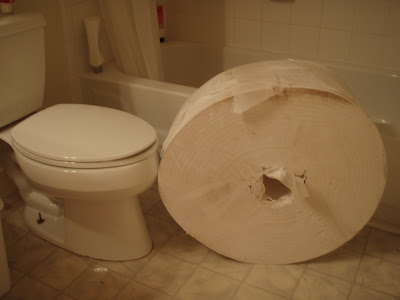 I think it was all about avoiding the handle bar that is installed midway up the stall. So this rocket scientist had a choice: position the paper high, above the bar, or install the paper low. For some reason low made imminent sense (is this because they don’t use the stuff, thus don’t “get” the failed functionality test?). Thus, these mega-rolls are forever installed wayyyy downnnnn lowwwww, requiring the user to lean far to the left and back slightly or forward too much to then get her arm bent enough to be able to reach up into the roll canister to access the stubborn paper that is stuck therein. Once there, you must hard, but argh, you can’t, because some brainiac (perhaps an infrequent user of the product, like, say, a man!) decided it was going to be even cheaper (yay!) to make the paper one-ply (sometimes I think they’ve gotten it down to near zero-ply), so that if you try to pull it–and bear with me because there is physics involved in this and I fail miserably at science concepts–the weight of the 20-lb. roll of toilet paper (TP for short) precludes the ability for the ply-less paper from holding strong against the vigorous force of the pull. 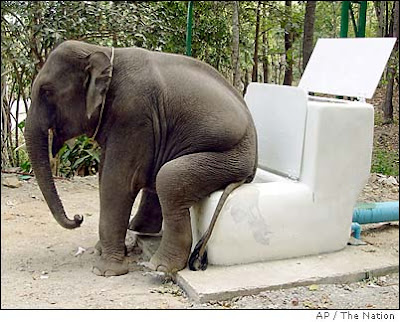 So the innocent bystander (or should I say sitter) in said stall is left, shall we say, holding the square. Because the paper is not going to come off but for sheet-by-miserable-sheet, while you bend over at an awkward angle (and dare I suggest that your average wheelchair-bound woman in a public restroom is likely ill-equipped to be lurching gymnastically leeward to do the TP-twist?).

To compound this dilemma, you have the auto-flush toilet (man designed? you decide…). I once was helping potty train a kid who was terrified of the auto-flush. Poor child burst into tears upon hearing the ominous rumbling of the oncoming flush, a locomotive coming down the tracks. Once, when attempted to help wipe said child, the power flush erupted after having to tilt the kid to one side, and the poor thing literally flipped into a forward roll off the toilet from fright. Leaving me—the one who always cracks up over the wrong things—to laugh till tears streamed down my face.

Okay, so how this fits in with this theme: when you are in the midst of the left-leaning swoop to try to clutch at the elusive weak-willed TP, you then move away from the omniscient laser-beam light that tells the pot it’s time to flush. So while you’re desperately grabbing for paper, that cursed thing is flushing. Again, and again, and again. Because after the first flush you instinctually sit upright to stop the thing from happening, but then darned if you don’t have to reaacchchhhh wayyyyy down to try to get that elusive paper.

Maybe the end-result of this design flaw issue is that women are less likely to use public bathrooms, an added bonus for the provider, who then saves in water usage (except when the auto-flush goes awry), paper consumption (because you can’t get to it and thus you give up even trying), and cleaning supplies (because no one is using it with the regularity of days gone by). Plus you save on all that toilet paper theft.

About that TP theft…I’m sorry! I did it! I was a stupid college student! What can I say?

Yes, I have a dirty little secret: I have to assume some of the blame in this TP quandary. I admit there were times when my college roommates and I would help ourselves to a spare roll or two from the dorm bathrooms and take them back to our apartment. On a college budget sometimes you had to choose between spending spare cash on beer or TP. I think you can guess which usually won the internal debate. I do remember being at a bar one night with three rolls tucked lumpily in my backpack. I have to concede that it would be downright impossible (not to mention awkward) to lug a 10-lb roll of that cheap paper in your backpack. Plus once you got it home, what would you do with it? You’d have to hammer a railroad stake into the wall and dangle the thing from it. (note to students: if you do so, please hang it high enough!). 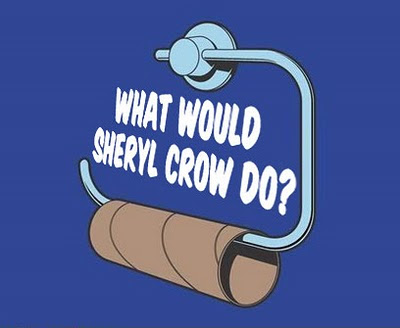 I have absolutely no idea what this has to do with this blog post but it seemed like such a bizarre image I just had to include it!

Okay, so back to the design thing. I am a female. I know how to do this better. It’s actually quite logical. Put the mega-giant-gargantuan roll of toilet paper up HIGHER, people (i.e. men who have decided it should be as close to the floor tiles as humanly possible). We women will appreciate it, and I have to assume particularly those in wheelchairs will thank you as well. End of rant.

Categories: humor, Jenny Gardiner, memoir, Over the Falls, Sleeping with Ward Cleaver, Slim to None, Winging It: A Memoir of Caring for a Vengeful Parrot Who's Determined to Kill Me, women, women's fiction

Tags: , House of Cards, humor, I'm Not the Biggest Bitch in This Relationship, Jenny Gardiner, memoir, Sleeping with Ward Cleaver, Slim to None, Winging It: A Memoir of Caring for a Vengeful Parrot Who's Determined to Kill Me, women's fiction