Falling for Mr. No Way In Hell 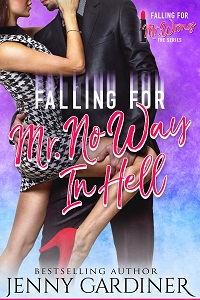 Lacy Caldwell’s mermaid gig at a cheesy roadside beach bar provided much-needed income while she pursues her graduate degree. That is until the beloved owner dies and her greedy nephew announces he’s cashing out by closing the bar and selling the property to a developer who’s going to replace the kitschy charm of the Mermaid’s Purse with ocean-view condos.

Cameron Sanders can’t believe his good luck. Struggling financially, he’s thrilled to find out some random, ancient aunt he hardly knew died and left him an inheritance that’ll help take the money monkey off his back. He’s ready to go to the mat in battle when some annoying mermaid from the bar tries to throw a wrench in his plans. But things get complicated when he realizes that she’s a woman he’s started to have feelings for.