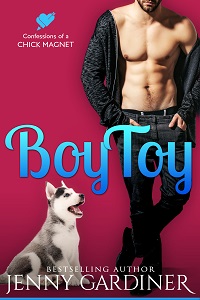 Book 2: Confessions of a Chick Magnet

Does this ring make my ass look big?

Izzy Strong has grown weary of the loser guys of L.A., having ditched the latest, a guy who couldn’t seem to look up from his ESPN app to conduct a meaningful conversation. He’d followed on the heels of a lifeguard obsessed with sharks, a waiter who bragged far too often about serving the Kardashians, and a foot fetishist who demanded she wear sandals while vacationing at a ski resort in the dead of winter. So when she hears about a charming man from the remote Montana town where her best friend Zoey lives who’s holding a contest to give away the very expensive ring from his failed engagement, she hightails it to Bristol, Montana to see if he’s as bighearted as her friend claims he is. Too bad she finds out immediately that he’s a thoughtless jerk who hasn’t the common decency to even curb his dog.

Sully Forester is ready to let go of the last remaining ties to his long-term relationship with a fiancé who ditched him weeks before their wedding: the engagement ring. When he decides to hold a contest to flat-out give the pricy bauble to the person who persuades him he’s most deserving of it, he has no idea of the craziness he’ll be unleashing in his adopted town of Bristol, Montana. Beginning with being wrongfully accosted by a cranky shrew of a woman who flips out on him for his dog’s transgressions, even when his dog isn’t the culprit. Thank goodness he’ll never see her again.