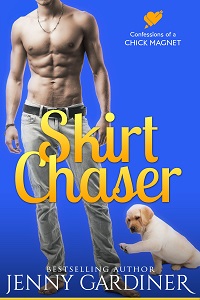 Book 1: Confessions of a Chick Magnet

Zoey Richards needs to get far away from her past. Following a broken engagement and an earful of I-told-you-so’s from her controlling parents, she decides to flee the West Coast for the hinterlands, finding herself alone and licking her wounds in the wide open spaces of Bristol, Montana, happily away from anyone who knows her or anything about her life.

Tanner Eliason loves that no one knows who he really is. More like who he was. As the son of a famous film director and his attention-seeking starlet wife, every moment of his childhood was recorded by the paparazzi for posterity. And suffice it to say nothing about your childhood should be in the public spotlight so much. So when the daughter of a family friend punches a ten-year old Tanner at a film premier and he runs to his mother for solace, the media had a field day mocking the poor boy. From then on, Tanner counted the minute till he could escape his childhood and carve a normal life for himself in the mountains of Montana, where no one would ever know that he once was known the world-over as the Weeping Wimp. That is until the girl with the mean left hook shows up in his one-horse town, and threatens to make his life a living hell.