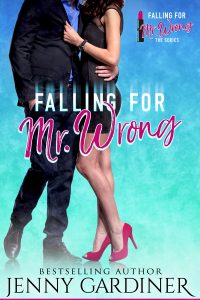 If lusting after him is wrong, she doesn’t want to be right…

Harper Landry sometimes feels like she’s turned into a professional dater. Which might not be such a bad job if it didn’t involve having to spend so much time with a succession of truly undesirable men who were obviously still single for good reason. So she’s elated when she ends up on a blind date with the charming and handsome Danny Greevy, a man who seems too good to be true. But Harper’s starting to think that too good to be true might be downright perfect for her. Particularly when the man who launched her man-drought shows up unexpectedly to throw a wrench in her life yet again.

Noah Gunderson is back in town after traveling the world for the past several years. Forced to return home after promising his mother on her deathbed to save the beloved inn that she’d nearly run into the ground, he’s planning to get far away from Verity Beach just as soon as he’s got the inn back in the black. And he’s determined not to let the distraction of Harper Landry, the one that got away, keep him here a moment longer.