Love Is In The Heir 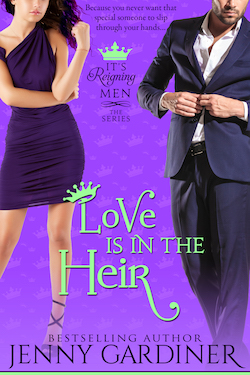 Ya gotta hand it to him…

When the teenaged Duchess Pippa Grimaldi walked in on her best friend’s brother Prince Christopher in a particularly private moment, she about died of embarrassment.

As did Topher, especially when his brother Zander and the rest of his royal siblings then promptly dubbed him the Wanker and never let him live down his public “exposure.”

It seemed the only way he could escape his overwrought reputation was by fleeing Monaforte altogether, which he did for years.

But when he finally returns to the European principality for the wedding of his brother Prince Adrian, Topher finds himself relishing a most unexpected one-night stand with none other than free-spirited Pippa.

And while Topher would like nothing more than to nurture the secret crush he’d had on her for years, she decides the only way to spare him further shaming at the hands of his brothers is to get far, far away from him. Even if being with him stirs feelings she’s never felt with another man.