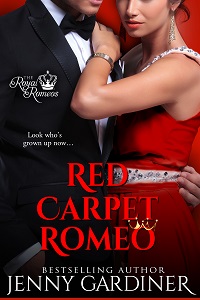 Valentina Romeo loved a romantic wedding, and couldn’t wait to serve as an attendant in her favorite cousin Prince Luca of Monaforte’s upcoming nuptials. She and Luca had reveled in childhood summers at the family estate on the Ligurian Sea. Many of her fondest memories were made there, along with one of her most humiliating, when Luca’s college roommate Parker shunned her brave declaration of love.

Investment banker Parker Hornsby hadn’t been back to Monaforte since he was in college. Back then he’d spent a glorious summer enjoying idyllic days at his best friend Luca’s family beach home. The fun was marred only by Luca’s obtrusive younger cousin Valentina, who could barely mask her crush on Parker, forcing him to flatly cut her off before she got her hopes up. The last thing Parker wanted was to be accused of going after his friend’s jailbait cousin, even if she was about the sweetest fourteen-year old girl he’d ever met.

But when Parker shows up in Monaforte, paired in Luca’s wedding with Valentina, all bets are off on whether he can restrain himself from the beautiful—and fully grown-up—heiress to the world-famous Romeo wine label, or whether her remains the nemesis she thinks he is.