Hard to Get Lucky 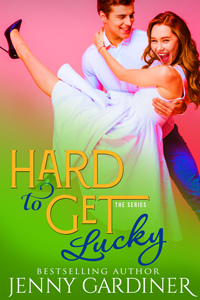 Not such a cutie patootie…

Alyssa Heyward has held a powerful grudge against Josh “The Mad Tooter” Trumbull for the better part of her life. Not that obsessing over something that happened when you were a tween is a particularly helpful thing to do for your mental health. And not like she’s dwelt on it forever. In fact, she hadn’t considered it—or him—for a long, long time… Until he shows up at her door as the new general contractor set to do major renovations on her house. Which instantly resurrects all of those old feelings about the sleepover at her best friend’s house when she ever-so-reluctantly agreed to partake in her first (and last) game of spin-the-bottle. When the creepiest boy in the Fourth grade spun, and the bottle pointed toward Alyssa, she thought her life was over indeed. And when she stood as far away from him in the dark storage closet instead of submitting to an unwanted kiss from the boy everyone knew had eaten a fly in the cafeteria and whose propensity for, um, breaking wind in all the wrong places (not to mention belching like a bullfrog) were the hallmark of his personality, she hoped she’d dodged a bullet. Until Josh Trumbull exited the closet and told everyone that instead of kissing him, Alyssa had emitted a noxious fume in the closed space.

Perhaps the high point of Josh Trumbull’s prank-filled childhood happened at a spin-the-bottle party, when the girl he fostered a wicked crush on refused to grant him that one little kiss, and instead treated him like a pariah when they were sequestered in the dark confines of the kissing closet. Quick on his feet with a rejoinder, Josh popped out of the dark room and told all his buddies that Alyssa had pooted in there, killing all romantic notions of a first kiss.

He hadn’t given this moment a second thought for the rest of his life. Until now. When he rings the doorbell of the woman whose home he’s set to renovate and when she opens the door, her face falls, much like it did when that spinning bottle pointed straight at her nearly fifteen years earlier. Leaving him to wonder: does he have any chance of rebuilding a relationship with the woman who hates him most as he rebuilds her home?