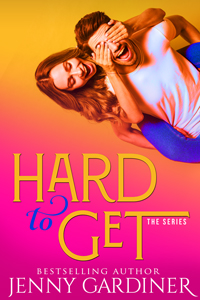 Lola Quigley can’t believe her good luck when she wins a spot on the Food Channel’s popular Shop till you Drop. The show features amateur foodies competing to produce a prize-winning meal from staples commonly found in food banks, where people often unload their most unwanted pantry items. Having lived on a near poverty-level budget for a few dark years when her life imploded unexpectedly, Lola had grown to love the challenge of creating delicious meals with the cheapest ingredients she could find on the sale shelf of the grocery store, or—in a twist of irony—donated from her local food bank. She just has to win this: the prize money would help her launch the soup kitchen food truck she’s dreamed of starting. It’ll be her way of paying it forward after she managed to dig out of a financial hole she’d doubted she ever could escape.

Levi Patton is pissed. He’s stuck doing penance as a guest chef on an annoying cable reality TV show where overly enthusiastic wannabes try to outdo him with random undesirable ingredients. Will he ever get over the meteoric crash of his career after a food critic found the unmistakable tail of a rat floating atop his bouillabaisse at Levi’s revered Washington, DC, restaurant? Convinced, but unable to prove, that a jealous sous chef sabotaged him, his name is now mud in the food world; he’s drowning in the veritable toilet of the culinary industry: competing on Shop till you Drop. And he’s totally screwed when he ends up pitted against the overly cheerful brunette with the tattoo of Popeye on her bicep, the very woman he’d left at the altar nearly a decade ago.