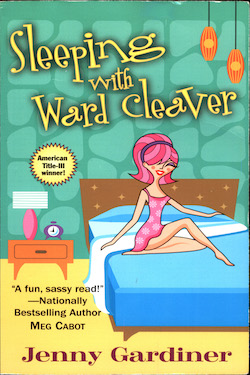 Claire Doolittle realizes her life hasn’t quite met up with her expectations. Overwhelmed with the demands of motherhood and life in general, it doesn’t help that the funny, romantic and thoughtful man she once married has turned into a real-life version of Ward Cleaver, the famously dull, bossy father from the 1950’s sitcom Leave it to Beaver. And the last person in the world Claire ever imagined having to sleep with for the rest of her life is a man whose sex appeal more closely resembles that of George Washington than George Clooney.

Throw in an ex-fiance who returns via e-mail to try to woo Claire back with promises of what was, and a sexy young colleague of husband Jack’s, whom Claire suspects of some sort of hanky panky, and you have the ingredients for a mid-life crisis that threatens to plunge Claire’s world into chaos.

“A fun, sassy read! A cross between Erma Bombeck and Candace Bushnell, reading Jenny Gardiner is like sinking your teeth into a big frosted chocolate cupcake…you just want more.”

— Meg Cabot, author of Big Boned and Queen of Babble Gets Hitched

“If you enjoy funny, laugh-out-loud books, stories of women going through mid-life crises, you will enjoy SLEEPING WITH WARD CLEAVER. Although the situations are serious, the author looks at them with such a comedic bent that readers will laugh, even when the situation is somewhat grim… Well written and well paced, SLEEPING WITH WARD CLEAVER is a romp and a lot of fun — it is a book readers are sure to enjoy.”

“Fast paced and funny…Sleeping With Ward Cleaver is a clever and engaging romance with humor and heart.”

“Sleeping With Ward Cleaver is the most refreshing book I have read in quite some time.”

“This debut novel, winner of the American Title III competition, is an engaging, thought-provoking and humorous insight into what happens when harried meets surly. You won’t be sleeping til you’ve finished it.”

“An engaging look at a middle age marriage as the two lead characters have become cemented in their ways and spontaneity no longer exists to unite them in fun. Claire is fabulous as she wants more than being Mrs. Cleaver mother to five, but her Jack expects her to meet his list of demands, keep the kids in line, and take care of his needs; he no longer seems to care about hers. SLEEPING WITH WARD CLEAVER is a deep look at marriage as the relationship goes into the phase of raising children.”

“Jenny Gardiner’s debut novel offers a boisterous and engaging glimpse of the realities of marriage. As brash and funny as it is moving and insightful, SLEEPING WITH WARD CLEAVER will leave readers wanting more from this delightful new author.”

“You won’t kick Jenny Gardiner’s debut book out of bed for eating crackers! Sleeping with Ward Cleaver is a sassy and sexy read.”

“Honest, real, and wickedly funny, Sleeping with Ward Cleaver is a keeper!”

— Jane Porter, author of Flirting with Forty and Odd Mom Out

“Alternately giddy and moving, Jenny Gardiner’s Sleeping with Ward Cleaver is a novel that would leave the original Ward shaking his head…but his wife June would be clapping her hands and twirling her pearls.”

— Lauren Baratz-Logsted, author of How Nancy Drew Saved My Life and Vertigo

— Suzanne Macpherson, author of The Forever Summer and Hysterical Blondeness

“With its razor sharp (and, at times, deliciously bawdy) wit, as well as its uncanny insight into the secret lives of married women, Sleeping with Ward Cleaver is certain to both resonate with and delight wives and mothers everywhere. Jenny Gardiner is a refreshing new voice in women’s fiction.”

— Bev Katz Rosenbaum, author of I was a Teenage Popsicle and Beyond Cool

“I about died laughing reading this novel! This debut novel is as much fun as reading a Stephanie Plum story or watching an episode of Seinfeld. Mid-marriage crisis is the central theme and Jenny Gardiner keeps the emotional upheaval, mental turmoil and family problems , and yet depicts it all with an irresistible dash of humor that’s as funny and real as can be. Readers will be irresistibly reminded of snapshots of incidents or snippets of conversations from their own married life while reading this story, and thanks to Gardiner’s excellent presentation, get a laugh out of it to boo! No wonder Jenny Gardiner won the American Title III contest with this story.”

“If you want to laugh until you pee your pants, then pick up this book. If you want to gain some insight into what goes into a marriage, then pick up this book. I loved the character of Claire. She is someone that every woman can relate to, young or old. Jenny Gardiner has a gift for finding humor and at the same time tackling tough issues. This is a great mom lit book to read by yourself, or giggle about with your book club.”

“Jenny Gardiner got Sleeping with Ward Cleaver in print by winning a sort of American Idol for novelists, and she very much earned the prize. Her writing is a tasty mixture of humor and rage. I found the little extra bite made it even more delicious.”

“Jenny Gardiner brings to life Claire Doolittle with such vibrancy that I feel I know her. Such was my concern over Claire’s and Jack’s happiness, that I couldn’t put the book down which is a rarity for me. With her sharp wit and hilarious descriptions, Ms. Gardiner has a delightful voice that left me wanting more.”

“This book is the Bridget Jones Diary for all of us married and harried moms! And perhaps a good gift to give to our younger and single girlfriends. It’s a gentle and humorous way to give them a glimpse of what’s to come . . .Sleeping With Ward Cleaver is the perfect romantic comedy. I can only hope Rob Reiner and friends will put this sassy book on the big screen!”

“SLEEPING WITH WARD CLEAVER is as clever as its title. Jenny Gardiner dares to delve into the dark underbelly of marriage, answering the question “What really happens when ‘happily ever after’ doesn’t last as long as one might hope?” While Claire’s emails will have you rolling on the floor, and the upbeat supporting characters provide a great counterpoint to Claire’s often pessimistic outlook, the heart of the story is in the painful honesty with which Claire faces the hard work necessary to make a marriage succeed. You’ll want to believe that love really can conquer all.”

“Sleeping With Ward Cleaver is a fun, cheeky, often candid and thoroughly engaging story that hits on relationship issues to which many readers will relate.”

“What a fun read from the attention grabbing title to the final elevator scene; I was chuckling and agreeing with every word. How did Jenny Gardiner manage to get it so right and put married life into such hilarious perspective?! But you don’t have to be married to appreciate the humor and witty words of Ms. Gardiner. Her determined character, Claire, is a woman we can all recognize as she raises phoenix-like from the every-dayness of life. For a fresh, funny, entertaining read, SLEEPING WITH WARD CLEAVER by award-winning debut author Jenny Gardiner is sure to delight and amuse.”