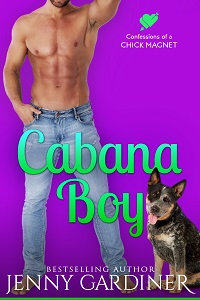 Book 3: Confessions of a Chick Magnet

All men are not created equal…

Fletcher Campbell thought he’d been hired by famous film producer Justine Gaynor to be her right-hand man, but quickly learns that she only wants him for how good he looks in a bathing suit—as evidenced by the frequent meetings poolside she insists he attend wearing only his Chubbies swim trunks, and where her hands always seem to find their way onto his naked flesh. He’s determined to prove he’s more than just a pretty face when he persuades her to premiere her latest film in his hometown of Bristol, Montana. Only he gets more than he bargains for when she makes him the laughingstock of the place he once called home.

Cricket Ferguson has no need for men in her life. She’s perfectly happy running the little French patisserie she started upon returning home to Bristol after a stint in pastry school in Paris and working at bakeries on the East Coast. Her shop keeps her plenty busy and besides, who’s got time for men who are only going to break your heart? Certainly not Cricket. That is, until the boy she wanted to marry shows back up in town on the arm of some famous Hollywood type, flaunting his fame and fortune and reminding her of the pain he caused when he went away all those years ago.