You Gotta Defy Age While You Still Can 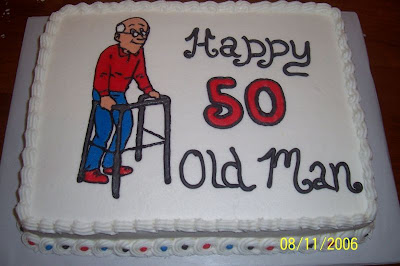 (I wish I’d made this cute cake but alas, I didn’t. found the pic on the internet)

My husband joined AARP. I told him it was a mistake, if for no other reason than a psychological one. Who wants to be lumped in the oldster crowd the minute you crest 50? 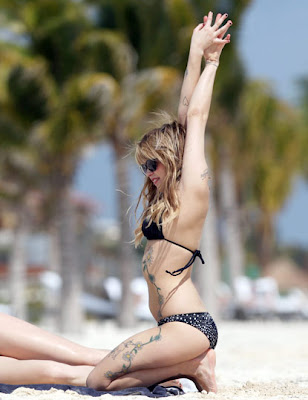 Now we get brochures in the mail for nursing homes, which is premature, for one thing. Plus, with this lame economy, don’t they know we’ll be sleeping on park benches by the time we actually need a nursing home? Although by then I envision gulag-style developments where all the broke, aged baby boomers who lost their retirement savings in the real estate bubble will be relegated to wither away during their twilight years, tooling around in half-broken wheelchairs over cracked failing pavement. How’s that for golden years?! If we’re lucky we’ll be housed in all of the default-loan houses that can’t sell because no one can afford to buy them because no one can get jobs because corporations are too busy stockpiling record earnings for the top 1% of their staff to bother hiring anyone else and creating jobs so people can afford to, um, live. Sorry, I got a little off-topic. Back to early aging (although I call dibs on a house in Miami if it comes to my prediction).
My girlfriend, now in her early 50’s, joined the senior’s tennis league because she can happily whip the butts of the much older gals. She thrilled to win and win handily this way, and she’s got a valid point there. So maybe acceding to age isn’t always a mistake–it can be gratifying. 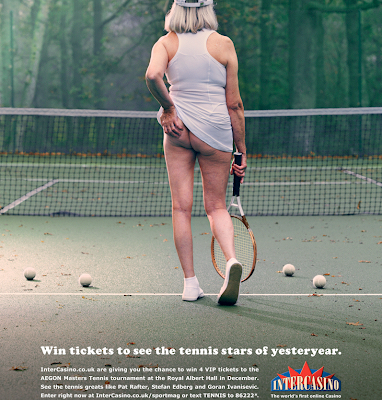 (my friend would not appreciate this picture and what it suggests about older tennis players losing their, um, charms)

I enjoyed a brief phase as a tennis player (not a good one, just serviceable). I’d always wanted to flit about in a cute tennis skirt and the only way you can really get away with that is if you play the sport. So I did, until I kept getting injured and had to stop. So I had to give up my cute skirts. Now they have exercise skirts which I’d so love to don but as a keen observer of what does and does not work in gym wear, I recognize that a) you have to have a rockin’ body to wear exercise skirts and b) you can’t be my age and get away with wearing them unless you’ve run at least ten marathons in the past five years–it’s like a golden ticket pass.
Wise to the cuteness factor of tennis skirts, for years I tried to encourage my girls to play tennis but they would have nothing to do with it. “Think of the cute outfits!” I told them, but it fell on deaf ears. And then my youngest finally got her chance for adorable sportswear last year when she was recruited to pinch-hit for her varsity field hockey team when they needed a goalie. A long-time soccer goalie, she’d never played field hockey before, and I’d never seen a match before, so I naively thought, “At last, she’s going to have a cute uniform, those adorable little plaid skirts! Lucky her!” Imagine my surprise when I showed up at the game to see my daughter in goal looking like the Stay-Puft Marshmallow Man, garbed as she was in boxy padding that essentially hid every hint of her existence. I was happy for her from a safety standpoint, but felt badly she got the short end of the uniform stick. 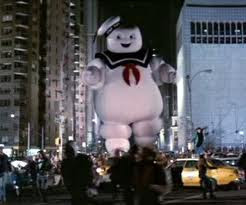 I saw an exercise skirt today that I really want (but will not succumb to, knowing that it’s the female equivalent of the very large guy on the show Modern Family wearing tight bicycle shorts–a big no no for all involved. My girls forever warn me not to look like that at the gym and I generally take heed. But this girl had on a skirt with back pleats that swished when she walked and darn it, I want to swish when I walk but then I realized I’m not a swisher, never have been, and nearing 50, it’s past the point at which I’m even allowed to swish. You have to recognize your limitations, I always say. But it also doesn’t mean I have to yield to my age and join the AARP, which I won’t, thank you. At least not till I can reap the benefits of the senior citizen discounts, maybe.
Last week my husband got a special gift from AARP. A leather-look vinyl man-purse. Just the thing he needed to complete the loser picture he signed up for. As if it’s not bad enough, it’s emblazoned with the AARP logo, just to seal the deal. I suppose at least it wasn’t a man-skirt. 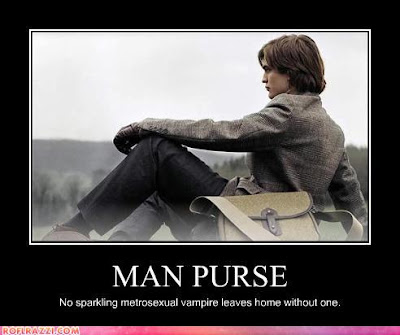 I dunno, maybe I’m being unfair with this whole AARP thing. Perhaps it’s useful to get the inside scoop on the latest in retirement villages. Even if it is cruel, dangling fancy retirement homes in front of him, considering at this rate we’ll never even be able to sell our house, let alone retire. We might even have to turn it into a retirement apartment or something, at the rate the economy is going.
Jenny Gardiner is the author of the award-winning novel Sleeping with Ward Cleaver, as well as the novels Slim to None and Over the Falls, the novel House of Cards, and the humorous memoir Winging It: A Memoir of Caring for a Vengeful Parrot Who’s Determined to Kill Me. She also has a story in Wade Rouse’s upcoming humorous dog anthology I’m Not the Biggest Bitch in This Relationship (NAL/Sept ’11), a fundraiser for the Humane Society of the US and selected animal charities. 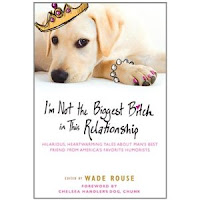 Categories: Books, humor, Jenny Gardiner, Over the Falls, Sleeping with Ward Cleaver, Slim to None, Winging It: A Memoir of Caring for a Vengeful Parrot Who's Determined to Kill Me, women's fiction

Tags: , House of Cards, I'm Not the Biggest Bitch in This Relationship, middle age