Pity the man who looks like Charles Manson. Because no matter if he’s a perfectly sane accountant from Dubuque with 2.5 children, a wife and a home in the suburbs, most everyone will snap to judgment that he’s a crazed maniac with murder on his mind.

Perhaps the thing about Manson that set him apart was that maniacal glint in his eye, the very anti-twinkle that translated into the suggestion of the evil of which he was capable.

Thus was my thinking at my very first book signing. I was already apprehensive about the event, feeling an enormous sense of pressure to perform well, to sell enough books to justify the efforts the booksellers had gone to on my behalf. To not be a complete loser.

So when I ended up at a bookstore that was located in the sketchier part of the unfamiliar city in which I was signing, I was a little dismayed. Most of those entering the doors of this bookstore had more piercings on their faces than the sum total of pierced anythings on my entire street back home. These customers didn’t strike me as the type willing to pony up a moment of attention (let alone seven bucks) to learn about a book titled Sleeping with Ward Cleaver. Nary a happy (or unhappy, for that matter) housewife meandered into the store for the first 15 minutes of my signing. That’s who I was on the lookout for: a wife, a mom, the type of person who would most definitely get the humor behind Sleeping with Ward Cleaver because let’s face it, there’s an experiential element to the novel. If you’ve been there, done that, with my protagonist Claire, you’re going to be far more receptive to randomly picking up a book you’ve never heard of and spending money on it at the behest of a newbie author, especially when you only went into the store to purchase a book for someone else in the first place.

Prepare yourself for everyone coming up to you, looking enthusiastic and ready purchase your book at first sight, only to instead ask you directions to the nearest bathroom.

Expect people to come up to your table just to grab a handful of the free candy you’ve got on display.

And expect the nut jobs, the ones who show up at your table with no intention of leaving, prepared to regale you with endless tales of their public transportation experiences and parents who don’t love them, all the while helping themselves to half your candy stash.

So when the Charles Manson look-alike ventured into the store about 30 seconds after I’d sat down at the signing table, I wasn’t surprised. It was fate, I knew it. As soon as our eyes met, I immediately averted my gaze—I couldn’t not. I mean come on. Who wants to encourage a mass murderer over your way? But the eye contact had been made, and I knew, I just knew, sooner or later Charlie boy would wend his way over to my table.

Now I should mention that yes, this guy had the grizzled, unwashed look of Charles Manson. He had the creepy glint of madness in his eyes. He also was lugging a small watermelon beneath his armpit. Don’t ask me why.

Charlie didn’t come immediately to my table. Perhaps because the bookstore employee was nearby, who knows? But within ten minutes he’d made his way back to my lone desk. He looked at me. He looked at my candy. He looked at me. He looked at my candy. He then proceeded to pick up a copy of my novel from the pyramid of them stacked in front of me, and feigned interest. In case you haven’t seen my cover, I’ll describe it. It’s a campy 1960’s-style green, pink and aqua cover that triggers the tune of “I Dream of Jeannie” whenever I look at it, what with the Judy Jetson-lookalike woman perched atop the bed, her striped pink hair pulled back in a headband a la Marlo Thomas in “That Girl.”

Trust me, this is not the cover that normally lures 40-something men (and certainly not those who look like they’ve just been sprung from court-mandated rehab. Again.). I have yet to have a man pick it up and leaf through it out of interest, unless their wife is along or unless it’s someone I know.

So I was onto Charlie. I knew he wanted something from me, and it wasn’t a humorous 300-page novel about a housewife in the throes of a mid-life crisis.

I tried to make small-talk. But Charlie didn’t talk beyond a few indecipherable mutterings. It was like being in the presence of Sherry and Lambchop, or a ventriloquist from the Ed Sullivan show. Or Charles Manson.

Instead, Charlie plunked his watermelon onto my miniscule tabletop, knocking over books in the process, picked up my signing pen (and his dirt-encrusted fingers did sort of bum me out, since I knew I’d soon have to touch that very pen myself), took one of my business cards, flipped it over, and started to draw.

Now the first thing Charlie inked for me looked suspiciously like a puerile attempt at a set of naked breasts. I forced a weak smile, unwilling to ask exactly what he was illustrating. But he finished it off with what I soon realized was a mouth and eyebrows, and it dawned on me that he’d drawn a rudimentary smiley face. Okay, I was hoping Charlie was done at this point. I thanked him for his lovely illustration. But he continued. His palsied hand trembling in classic heroin-withdrawal fashion, he then sketched out a Keith Haring-like stick figure that had a hint of Mr. Bill to it. And topped off his masterpiece with his illegible signature. What do you think of it? 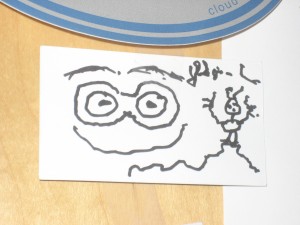 For all I know I am in possession of a work of art by a famed contemporary pen-and-ink master who took a wrong turn in life. Who once knew of fame and fortune and now wanders aimlessly, unwashed and odoriferous, with a watermelon tucked in his arm like a pigskin cradled by a running back. As much as I was oddly charmed by my newfound artwork, I wasn’t particularly interested in having Charlie block my signing perch from the few mom-like individuals who ventured into the store that night. So I immediately offered him some kisses (the kind from Hershey’s, not my lips), which mercifully satisfied his need. Grateful, he wandered off, peeling the silver wrapping and discarding it in his wake.

And leaving me well aware that I’d experienced one of my first rites of passage as a published author. Armed and ready for the next one to come along.

Excuse me, can you tell me where the bathroom is? Categories: Books, humor, Jenny Gardiner, News, Sleeping with Ward Cleaver, Slim to None, Winging It: A Memoir of Caring for a Vengeful Parrot Who's Determined to Kill Me, women's fiction