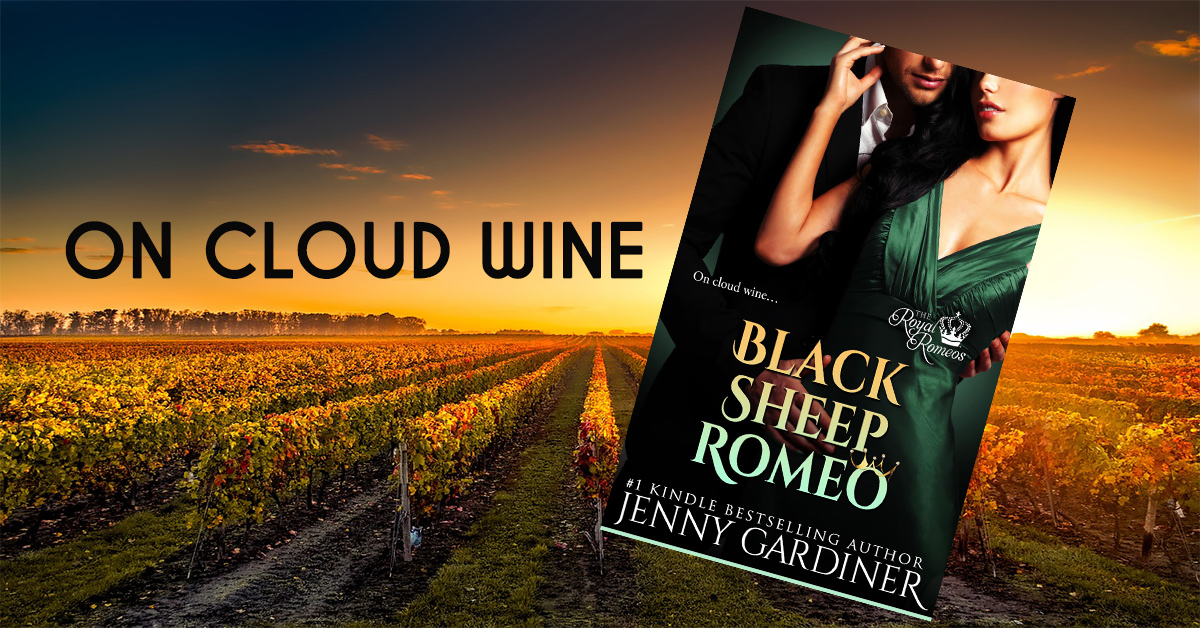 Sometimes trouble seems to find Matteo Romeo whether he seeks it out or not. Long regarded as the black sheep of the famed Romeo winemaking family, he’s hardly surprised when he finds himself in yet another predicament, this time harboring an unauthorized farmhand who he’s discovered hiding in a tool shed just as the grape harvest gets underway.

Freespirited Lizzie Moretti has long prized her independence. Lizzie’s been wandering around the world, working odd jobs to earn just enough money to keep on the go. Forced to flee an aggressive host in the middle of a rainy night while working on a farm in Tuscany, she seeks the shelter of a tool shed until she can figure out a plan. Alas, it happens to be on the estate of the wealthy Romeo family on the eve of the coveted grape harvest, when strangers like Lizzie are most unwelcome.

She’s never put down roots. And he can’t seem to escape the roots that sometimes feel like they’re strangling him. They both walked away from family, but can they find salvation in the very family they’ve tried to run from?

I don’t know about you but I’m gearing up for Thanksgiving—making my grocery lists, strategizing going very early in the morning so as to avoid the crowds, and I’m even making pies with my good friend who wants to learn how to make pies. Should be fun!

Not to be cocky but I do make a mean pie—no credit to myself, but thanks to my mom and my grandma, whose fabulous recipes I do my  best to replicate. And now to be honest, my pies aren’t always the prettiest—each time I make one I get a little anxious about how the crust is going to fall when I least expect it, or if I haven’t rolled off enough dough to have an adequate crust, in which case the contents will end up leaking all over the oven while the pies cook and ugh, do I hate cleaning that baked-on mess when it happens! (though truthfully I never get around to cleaning out my oven so it ends up smelling like burnt fruit whenever I use the oven thereafter ;-). I’m disclosing all of my dirty secrets now!

We always have Thanksgiving with my husband’s family but I then come home and replicate the entire dinner so that we have leftovers, so the pressure is off of me for perfection and having everything ready at the same time (impossible to do that with Thanksgiving dinner isn’t it?!). I like to cook my turkey pretty straightforward—no deep-frying for me (I’ve watched too many fried turkey flash fires on America’s Funniest Home Videos, thanks). I brine it for 24 hours in sugar, salt and water (I’ve tried it with lots of fancier recipes but don’t like my turkey taking on a lot of flavors, so this just helps to keep it moister). I always make a family favorite—rice croquettes, which has been in my family for several generations (if you read my novel Slim to None you can get the recipe!), and then, well, I’m not a mashed potato lover but I’ll make them for the few in my house who’ll eat them. Gravy, of course! And that’s gotta be homemade. Again, I keep it super simple—to me Thanksgiving isn’t one of those meals you play around with perfection ;-).

And once Thanksgiving is over, I’ve got to hunker down with a December book deadline plus the release of Black Sheep Romeo—book 2 of my Royal Romeo series—on December 6. Hope you can check it out here! And I’ll reveal the cover for book 3—Red Carpet Romeo, which will be out February 17! If you want to start from the beginning of the series–which is a spinoff from my It’s Reigning Men series—you can start with Red Hot Romeo. 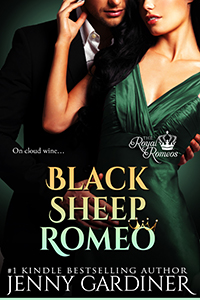 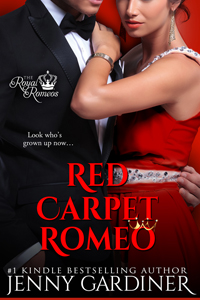 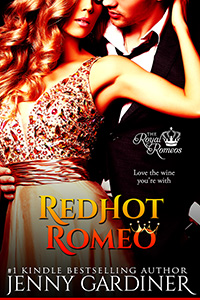 We do not take our votes for granted in our family–such a privilege people in other countries only dream of having is something not to be wasted. This year our daughter in Australia made certain her ballot was back in plenty of time to be counted. I wrote this four years ago when our son was living off-the-grid high up in the Peruvian Andes. It was quite a task to be sure his vote arrived in time:

We’ve always taken voting very seriously in our home. No matter what the circumstances, we have ensured that we cast our vote; it’s a right we do not take lightly. And when we had kids, we made it a point to regularly bring them along with us to the polls, with the hopes that they, too, would take this essential right of our democracy seriously. The kids would get to pull the lever or push the button, and wear their “I voted” sticker with pride all day long. Oh, and buy sweets at the inevitable bake sale awaiting us as we exited the polling station (maybe a bigger lure than I’d own up to).

Having traveled in countries where oppressed people would likely sell their mother for a fair vote, we truly value such a privilege. In fact, we take voting so seriously, you might say we’d go to the ends of the earth to make it happen.

So when my son departed in September for a year-long adventure, with the likelihood of being off-the-grid for extended periods of time, we had to be creative about trying to get his absentee ballot to him. Little did I know how resourceful we’d have to become…

When he left, ballots weren’t yet available. Which meant we had to brainstorm how to get something to him, knowing not quite where he’d be, nor when we’d hear from him. We were told mail was unlikely to ever reach him. Okay then….We didn’t hear from our son for several weeks, and finally he hitched a ride to the nearest town (six hours away) and we were able to Facebook message with him to nail down details. We decided it made the most sense for him to get an address for the hostel he was overnighting at. The plan was for Kyle to arrange for Raul, the farmhand at the farm on which he was working, to pick up the ballot upon its arrival when he’d go to visit his family every two weeks, bring it back to Kyle on the farm, where he could fill it out (we wisely included sharpened number two pencils), and await Raul dropping it, pre-packaged for return delivery via the hostel, two weeks later. We’d left plenty of time to get this done.

Kyle wanted to vote so badly he was willing to pay the steep ($90) one-way FedEx delivery cost for three-day delivery. Each way. Now I have to say I was pretty surprised to hear they would deliver something high atop the Andes mountains in Peru in three days time for any money, let alone under a hundred bucks. It took Kyle a 16-hour bus ride and another 4-hour ride jammed in the back end of a taxi and another six piled high on a vegetable truck to get to this farm. And FedEx assured us they’d get his ballot to him, no problem.

Only they didn’t. Two weeks later when Kyle hiked to 16,000 feet atop a mountain and surprisingly found himself with text service on his phone (who knew?!), we discerned that the all-important ballot was stuck in customs, only FedEx failed to notify us. Cue about a hundred emails, another forty phone calls, countless texts, and a lot of gnashing of teeth because of the efforts expended to make this happen, only to have it fail, and FedEx assured us the package would arrive that day. We’re still waiting. So far it’s been almost a month since we launched the three-day package on its journey, and the best we can tell, the envelope is part of FedEx’s innovative Llama Express program, which clearly isn’t working so well.

In the meantime, Kyle climbed the mountain again to find out where the package was a week later, as Raul was about to make his bi-monthly foray six hours away to visit his family. No worries that my daughter, who’s been studying in Italy this semester, freaked me out by telling me she’d skydived from an airplane over the Swiss Alps at 15,000 feet, and how can you breathe at that altitude another 1000 feet up? We’ll save that for another column. Because the focus was on the vote.

We finally heard from our son this week. He’s left the remotest reaches of the Andes, en route to some other equally obscure part of Peru, but temporarily in civilization. Sans his absentee ballot, which now seemed to have little chance of arriving, let alone returning Stateside in time. But I had a plan. A friend at the Department of Agriculture has a friend stationed in Peru, who so happened to have sent me information from the U.S. Consulate in Cusco about being able to cast your ballot and having Uncle Sam ensure it’s timely shipping home. I asked Kyle if he could divert to Cusco, which we’d heard was a gorgeous city and he’d wanted to get there anyhow. I called the Consulate, found out that while it was too late to facilitate the gratis USPS shipping, anyone who’s applied for an absentee ballot but hasn’t been able to receive it is able to download a Federal write-in ballot. Voila. All you need to do is a) find an Internet café where you can download and print the thing. Yeah, right. And b) find an envelope. Ditto. And c) take it the four more hours to Cusco, where you go to the DHL office (because apparently, as if we needed to learn this, the roving FedEx office is evidently less-reliable). No problemo.

As I write this, Kyle is en route to the glorious Incan city of Cusco, with plans to pay overnight shipping costs to send his ballot via DHL, with the hope/confidence that his vote will be counted come election day.

If not we’ll all be pretty disappointed, with the efforts to which we went to make this happen. (Oh, and FedEx? We’re expecting a refund, natch).

Now for the rest of us, all we need to do is show up at the local school, or fire station, or wherever your polling station is. You can load up on brownies and chocolate chip cookies, buddy up with friends and neighbors you’ll see while there, and hopefully not throw the stink-eye at those you know who are voting for the “other” candidate. Here’s hoping you get off your butt and vote on Tuesday. (unless, er, you’re voting for that other guy…)