AND SO IT BEGINS

I’m going to have to make this quick as I’m absolutely beat, but wanted to post the start of my journey.

Let’s just say packing was mildly amusing. I am the one who throws in the extra kitchen sink, after packing the main sink. Me and a pack ostensibly meant to hold 15 pounds is just a contrary concept. I tried, truly I did. But all those darned little things added up, not to mention the mere weight of the iPad I brought along, amongst other things.

Suffice it to say, when I start walking tomorrow, I expect tears. I will spew vulgarities about what a stupid git I am for having even fantasized about packing a blow dryer (yes, I admit, I pondered it in the far recesses of my mind, but no, I didn’t pack one. It was the first item on the “no way in hell” list).

It was hard to bid farewell to my family. Moms are conflicted about just bailing on the family, aren’t they? Even though the kids are off doing their own thing, there’s just this feeling that you need to be there just in case. And leaving Scott for a month — that’s a really long time and i will miss him! i must also say how grateful i am that he has enabled me to undertake this journey — his support has been invaluable. But everyone assured me I wasn’t being a self-indulgent self-indulger, so I’ll take it at face value.

So I headed off on my adventure relatively guilt-free but suddenly feeling quite anxious (no doubt mostly b/c of newly-anticipated need for a Sherpa). There’s just so much STUFF you need/want to pack for a month. Particularly when you figure you’ll be roughing it a bit, you want to toss in those little somethings that’ll make you feel mildly indulged (the foot lotion, the soothing arnica oil for muscle aches). Though in reality you should’ve tossed those in the “no” pile right behind that darned blow dryer!

Ah well, it is what it is. I expect I’m going to pull a Hansel and Gretel and leave a trail of divine-smelling toiletries with each kilometer trekked. I’ll keep you posted.

My flight was surprisingly quick and uneventful, though in the small world department, my daughters roommates father was my pilot! He did a fine job! I then met up with an e-friend I’ve “known” online for years, who I learned last week lives near Geneva. What a lovely day we had — we went to her beautiful home and I was able to make myself at home to reconnoiter (boy did I need that), shower (ditto) and enjoy a lovely lunch and great company. Topped off with a visit to her gorgeous horse. I navigated several trains from there to grt to Orsieres, wishing I’d had time to explore the area before departing — very picturesque villages along what I think was Lake Lausanne — stunningly beautiful. The town of Nyon (FIFA headquarters to you soccer fans) was exceptionally so. arrived around 5:30, settled into my hotel & went in search of food.

While wandering through the village trying to find an open restaurant, a man backing out of a parking space pulled over and started telling me in french about the local cheeses, unsolicited. I had years of french growing up but do you think I could converse in the language? Hell no. I hadn’t expected the first few days of my trip to be in french-speaking Switzerland, so I hadn’t brushed up on my french and instead have been blending French from the deepest regions of my brain with butchered Italian that I have been brushing up on — probably all the more confusing for the locals. Ah, well, merde…I was also corrected by a construction worker on my bonjours vs. bonsoirs — didn’t need it as I remembered it as I uttered the wrong word last evening. I think by the time I hit Italy I’ll then be speaking comprehendible French and then really trash my Italian. Thank goodness more Europeans speak English than Americans do foreign languages…Bonsoir mes amies!

(By the way I being my journey walking from Orsieres, Switzerland to Bourg-Saint-Pierre, Switzerland. Wish me bonne chance!)

To Roma with Love (and probably some creaky bones!) 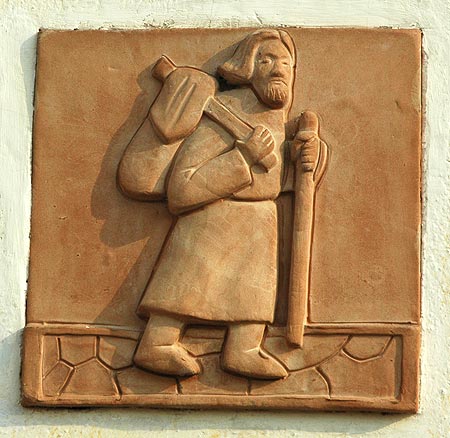 Apologies for the lack of details; they’ll be forthcoming soon. I’ve been crazy busy preparing for a journey I’ll be undertaking at the end of August: I’m going to be walking from the Great Saint Bernard Pass in the Swiss Alps to Saint Peter’s Basilica in Rome, Italy.

Details will follow, but I wanted to get this basic information posted for those who are interested in linking to the donation site I’ve set up. I am following an ancient Pilgrimage route known as the Via Francigena that extends from Canterbury, England to Rome. I’ll walk for a month, and hope to cover about 500 miles in that time period, hoping my legs will carry me about 16 miles a day. I’ll circumvent a bit of the Via Francigena along the Po River Valley in Italy, because it’s along busy roads with no safe shoulders on which to walk, and transects mile upon mile of rice paddies along with more unwanted mosquitoes than you can successfully swat at. Plus I had to cut out part of the journey to get to Rome in time, so this seemed to be the most logical section to avoid. 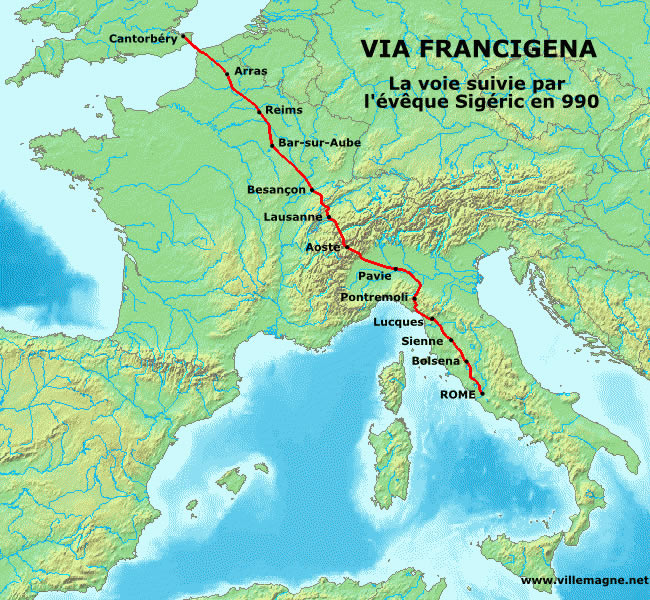 I decided to select a charity and try to raise money while I undertake this long walk, and loved the idea of helping out the Charlottesville site of the International Rescue Committee, which helps many people who have undertaken their own lengthy journeys to flee from war, famine, political persecution, natural disaster and the like. Having recently attended Monticello’s July Fourth Naturalization ceremony, I learned of the plight of several of those who earned their citizenship that day, and none were able to achieve it without the extensive help of the IRC, which helps people to find housing, work, language training, and provides a vital support network. I hope you’ll consider donating to this organization, and you can do so here.

If you’d like to learn more about the Via Francigena, this website that is full of information.

Thanks for your interest and please stop back as I post information. I leave on August 25 and plan to blog along the way!

Categories: Accidentally on Purpose, Anywhere But Here, Books, Chick Lit, I'm Not the Biggest Bitch in this Relationship, Jenny Gardiner, memoir, Naked Man on Main Street, road trip, Sleeping with Ward Cleaver, Where the Heart Is, Winging It: A Memoir of Caring for a Vengeful Parrot Who's Determined to Kill Me, women, women's fiction